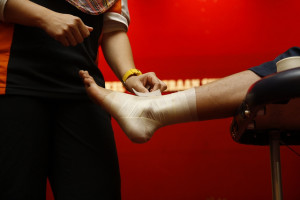 In the blink of an eye and the twist in a road 11 years ago, the lives of two young sisters changed for ever.

Shannon and Erica Deering were teenagers looking ahead to full and active lives.

Shannon, now 29, had won a scholarship to play softball in Florida. Erica, now 26, was still in high school but had hopes of becoming a lawyer.

All that changed in a horrific crash when both sisters suffered dreadful spinal injuries that left them quadriplegic.

Shannon was driving along a rural road between Oshawa and Port Perry when she was forced off the road.

At a news conference Wednesday, mom Deborah recalled the horror she faced when she had to bring her disabled daughters back to a home that had to be retrofitted to accommodate their wheelchairs.

Aside from major renovations to their home, they had to pay for nursing, physiotherapy and 24-hour attendant care.

“The costs are astronomical,” she recalled.

Just one thing stood between them and financial ruin.

“We said, ‘Thank God we had insurance.’”

Shannon and Erica were at Queen’s Park with other accident victims and the Personal Injury Alliance to protest changes to insurance rules introduced in last month’s budget.

The government proposes to slash the maximum amount a person can claim for a catastrophic injury from $2 million to $1 million.

And $2 million may sound like a lot of money, but when you’re paying for round-the-clock care, it gets eaten up quickly.

“We’ve already spent almost half of the $2 million we got from insurance,” Shannon said.

The Liberal government of Dalton McGuinty came to power in 2003 on a pledge to reduce the cost of car insurance premiums.

While premiums may have gone down, so have benefits — unless drivers buy additional insurance.

While no one argues the need to hold the line on payouts for minor bumps, sprains and strains, this change is devastating for people who’ve been consigned to a wheelchair for life.

It’s not just drivers who must worry.

Pedestrians and cyclists who don’t carry their own car insurance will suffer if they’re in an accident and the driver who hit them doesn’t have the extra coverage.

“There’s a whole group of people who won’t have the option to buy the optional benefits about which the Liberal government is speaking,” lawyer Sloan Mandel told reporters.